If you’ve been to Vietnam previously, you know that this is a wakes up early country! Even during the hottest months, public spaces fill up rapidly with the hustle and bustle of cities. Breakfast is an essential meal of the day in Vietnam since it offers the energy required to begin the day. Here is a list of the most delicious Vietnamese breakfast dishes to try when visiting one of our favorite countries!

Vietnamese cuisine is one of the healthiest cuisines in the world, and a traditional Vietnamese breakfast includes a broad variety of foods. Breakfast was traditionally cooked by women in the past. As an increasing number of Vietnamese women join the job market and lack time to make breakfast on a regular basis, many Vietnamese opt to have breakfast at street food stalls and restaurants today

The majority of traditional Vietnamese cuisine consists of fresh ingredients, herbs, and vegetables. The harmony between the herbs and meats is readily discernible in the flavor of any Vietnamese breakfast. Despite sharing a common characteristic, the Vietnamese culinary culture is varied and region-specific. 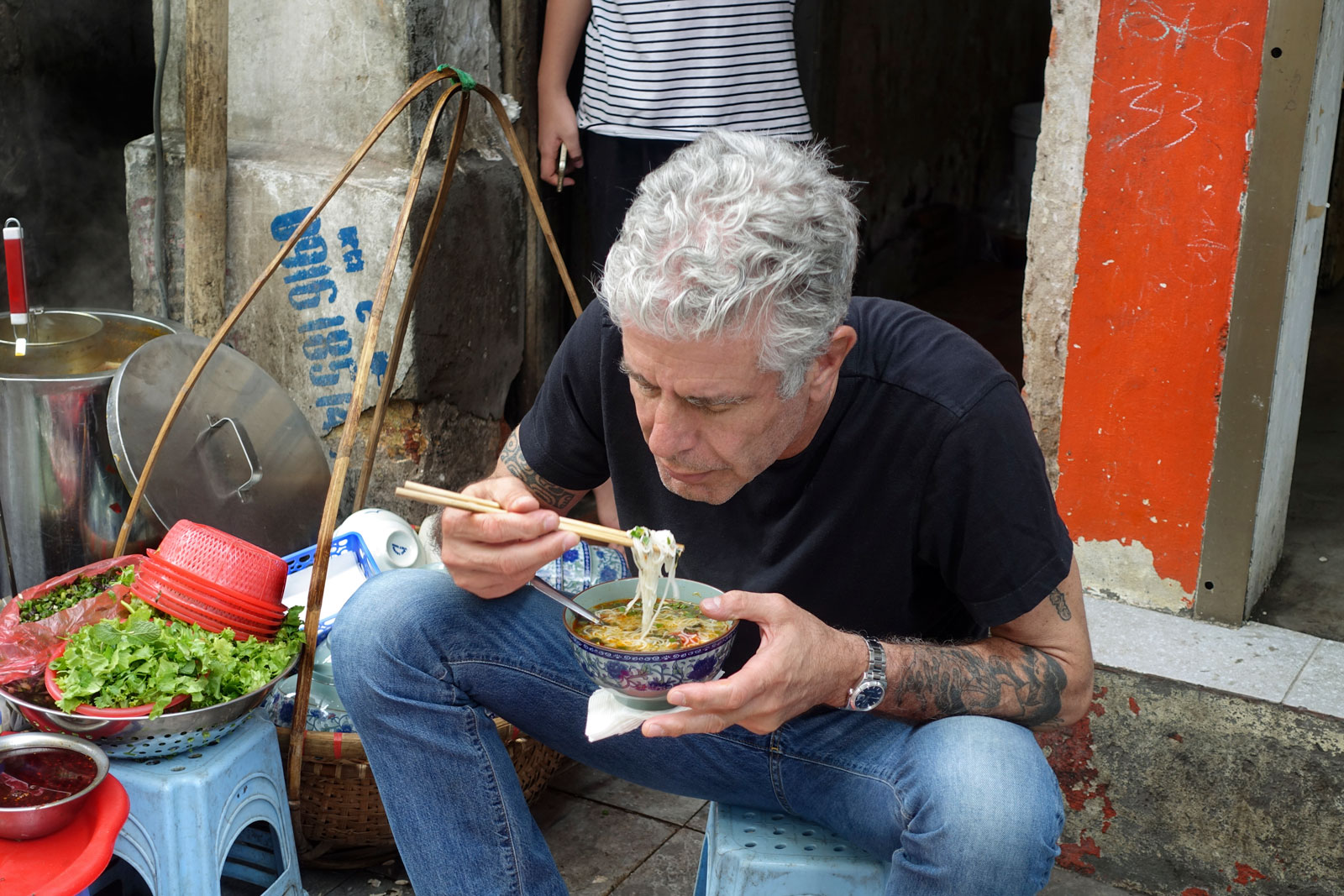 Northern Vietnamese cuisine is often less spicy than in other areas, and it blends several tastes, including salty, bitter, sweet, and sour. This region’s breakfast specialties are Bun Rieu, Banh Cuon, and Pho, which are also Vietnamese national meals.

Vietnam Central, in contrast, is renowned for its spicy cuisine. As the historic capital of the last dynasty of Vietnam, Hue provides cuisine that is heavily inspired by the traditional royal cuisine of Vietnam. Bun Bo Hue is a well-known breakfast dish in this region (vermicelli with beef).

The cuisine in the south of Vietnam is likely to be more vivid and tasty, notably sweeter, than those in the north and center. Banh mi (Bread) and Com Tam are typical morning foods in southern Vietnam (broken rice).

>>> See more:
Top 10 Vietnamese Street Food That You Have To Try Once

Vietnamese Breakfast in The North

Pho is the national dish of Vietnam and is a symbol of Vietnamese cuisine in many nations across the world. The primary components of Pho are noodles and broth with beef or chicken slices. There are a variety of spices, including soy sauce, pepper, lemon, fish sauce, and chile, to accommodate the varied tastes of clients. 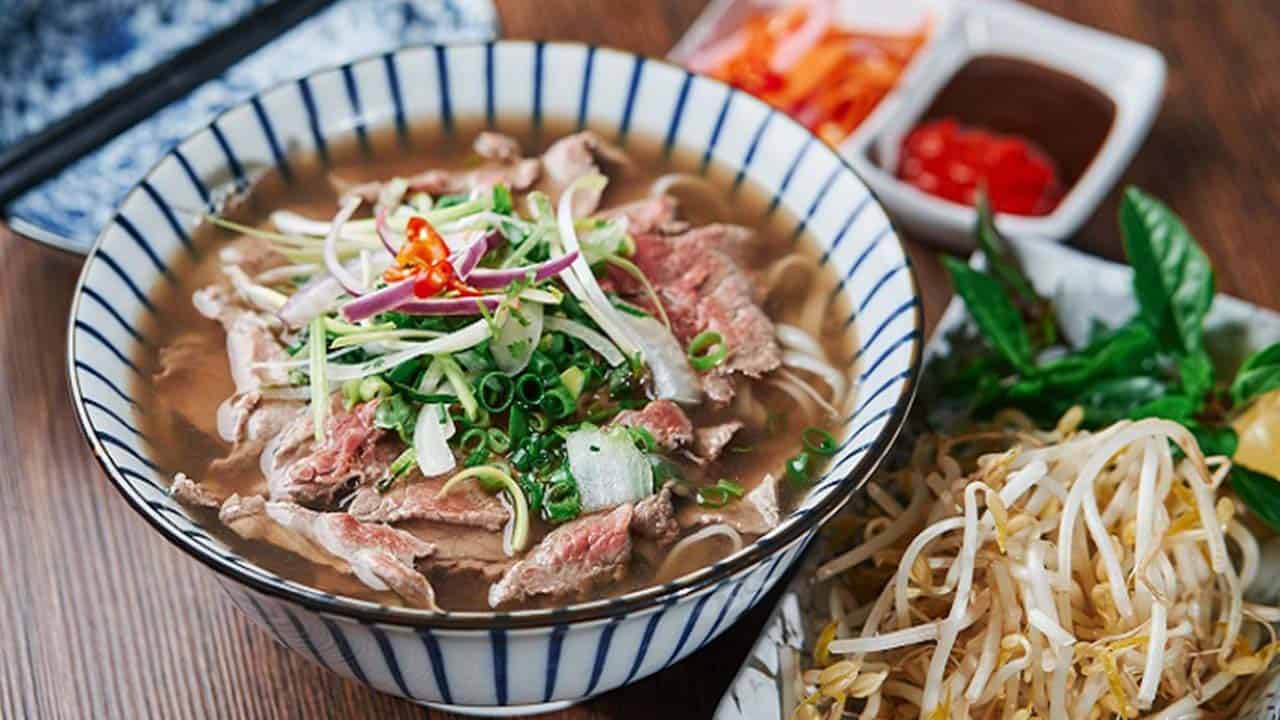 Additionally, a dish of fresh herbs, including bean sprouts, coriander, and basil, is added to enhance the flavor. Consuming a bowl of warm Pho during a cuisine tour in Vietnam will be the most memorable experience.

It is recommended as one of the must-try Vietnamese breakfast dishes not only for locals but also for international visitors. In addition to breakfast, Pho may be enjoyed at any meal, from lunch to evening.

Alongside Pho, bread is one of the most significant components of Vietnamese morning dishes. It features a yellow French bread crust and a yellow-brown harmony of each fragrant meat layer, green veggies, and white-green cucumber slices blended with carrot threads. 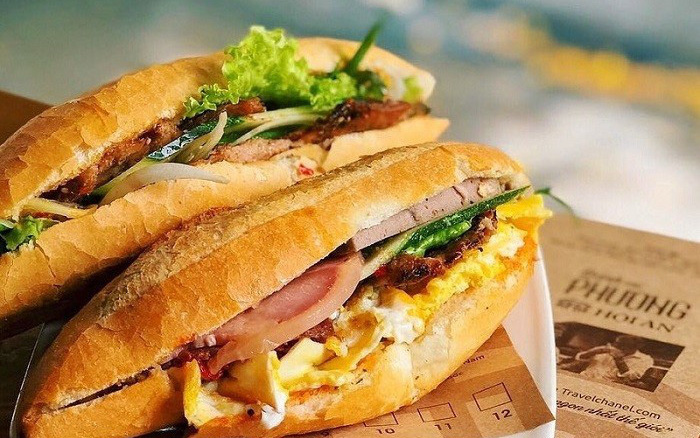 Not only is this Vietnamese breakfast dish visually appealing, but its flavor is also a major draw for customers. It is owing to the ideal balance of the crust’s heat, the meat’s richness, and the peculiar sour flavor of fresh or mixed vegetables prepared salad-style.

The majority of Vietnamese are engaged in agriculture and labor with their hands and feet, thus sticky rice is the greatest option since it makes the diner feel full. In addition, it is a traditional Vietnamese morning dish. Along the routes connecting urban and rural areas, it is not difficult to find a shop or street vendor selling sticky rice. 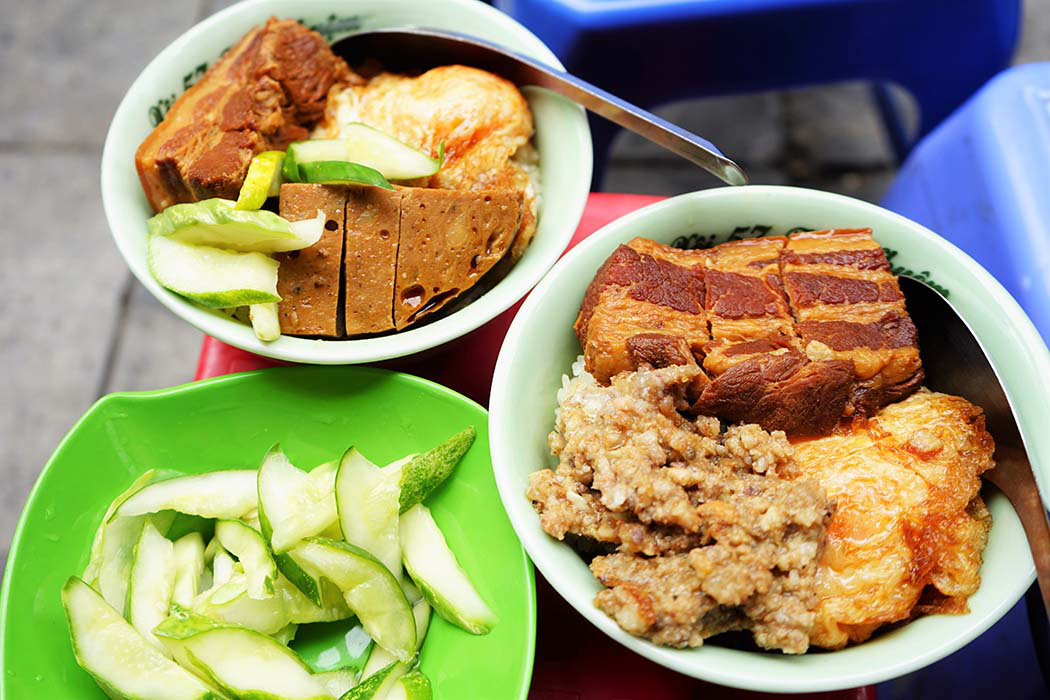 Although the primary ingredient is still sticky rice, the vendor can process it in several ways to make it more appealing, such as frying it, wrapping it in banana leaves, adding meat, etc.

Banh bao originated in China, but when transported to Vietnam, it was modified to suit the Vietnamese palate. Chinese dumplings are larger than Vietnamese ones. In addition, the filling varies dependent on the ingredients accessible in Vietnam, including ground pork, cat’s ear, mushrooms, vermicelli, sausage, quail eggs, and chicken eggs. 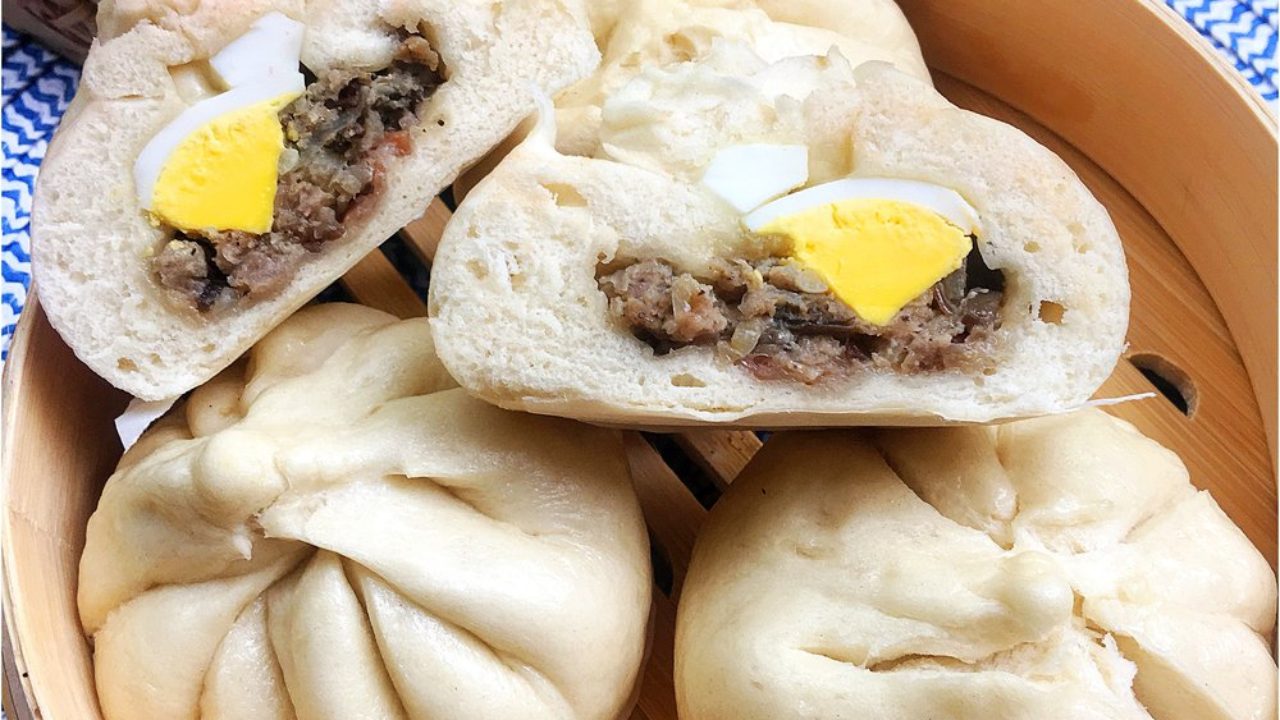 Banh bao is a very handy morning snack for Vietnamese people since it is sold by several sellers on the sidewalks; for a very modest price, you may fill your stomach with a warm Vietnamese dumpling. Banh bao should thus be on your list of must-try Vietnamese morning meals.

It would seem that rice is the progenitor of many excellent Vietnamese dishes; yet, there is another specialty made of rice flour called banh cuon. Banh Cuon has a layer of steamed rice flour that is both thin and broad covering its outside, and its inside is stuffed with minced wood ear mushrooms and seasoned ground pork. 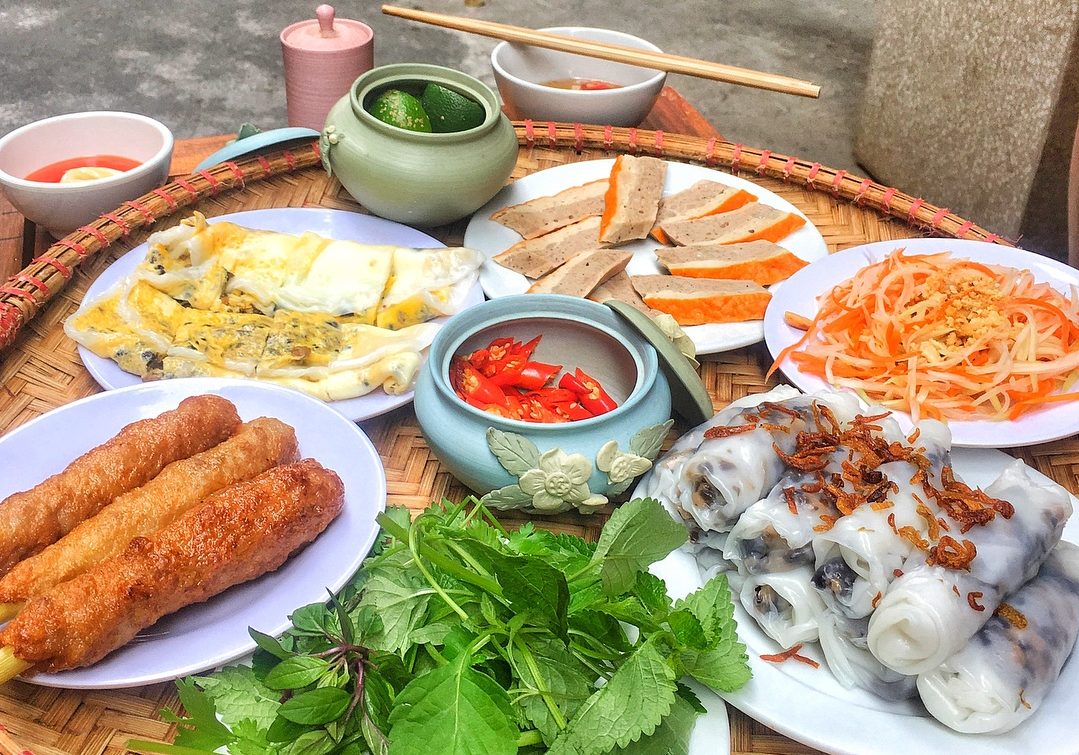 Traditionally, banh cuon is served with cha que and a unique dipping sauce known as “nước chấm,” which is created just for banh cuon. In the past, in order to get the optimal taste, a few drops of Ca Cuong’s oil were mixed into the dipping sauce. Ca Cuong’s oil may still be tasted today, despite the fact that it is becoming more difficult to get and far more costly.

Vietnamese Breakfast in The Central

One of the most common and practical dishes served for breakfast in Vietnam is bun bo hue, which is a kind of spicy beef noodle soup. In spite of the fact that it can be found in almost every part of Vietnam, the locals tend to refer to it as “Bun bo Hue” if they want to point out its place of origin. 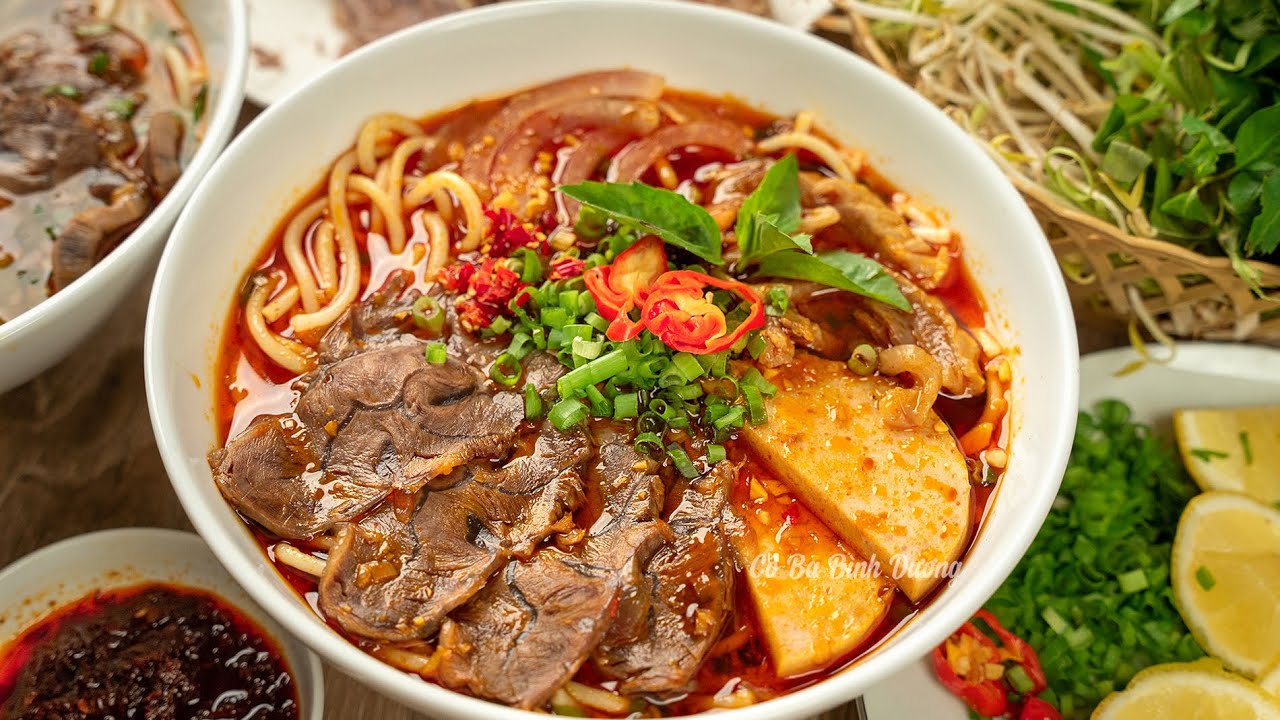 Noodles, beef, pig pies, and broth make up the majority of the ingredients; however, according to the preferences of the chefs and the requirements of the customers, additional components, such as crab pies and the like, may also be included. One of the distinctive features of Bun bo Hue is that it has a little fiery taste because of the use of chili powder, which causes the broth to become red.

In addition, some individuals try this dish with raw vegetables such as coriander, lettuce, cucumbers, and banana blossoms on occasion. It is strongly advised that you try some Bun bo Hue if you want to enjoy one of the classic cuisines that is served for breakfast in Vietnam. If you have plenty of time for breakfast, this dish is a must-try.

Quang noodle is a masterpiece of Vietnamese culinary art, despite the fact that its name may be alien to those from other countries. The term “Mi Quang” comes from the area in central Vietnam known as Quang Nam, which is considered to be the birthplace of the dish. The noodle dish has a flavor that is reminiscent of traditional food from China’s past. 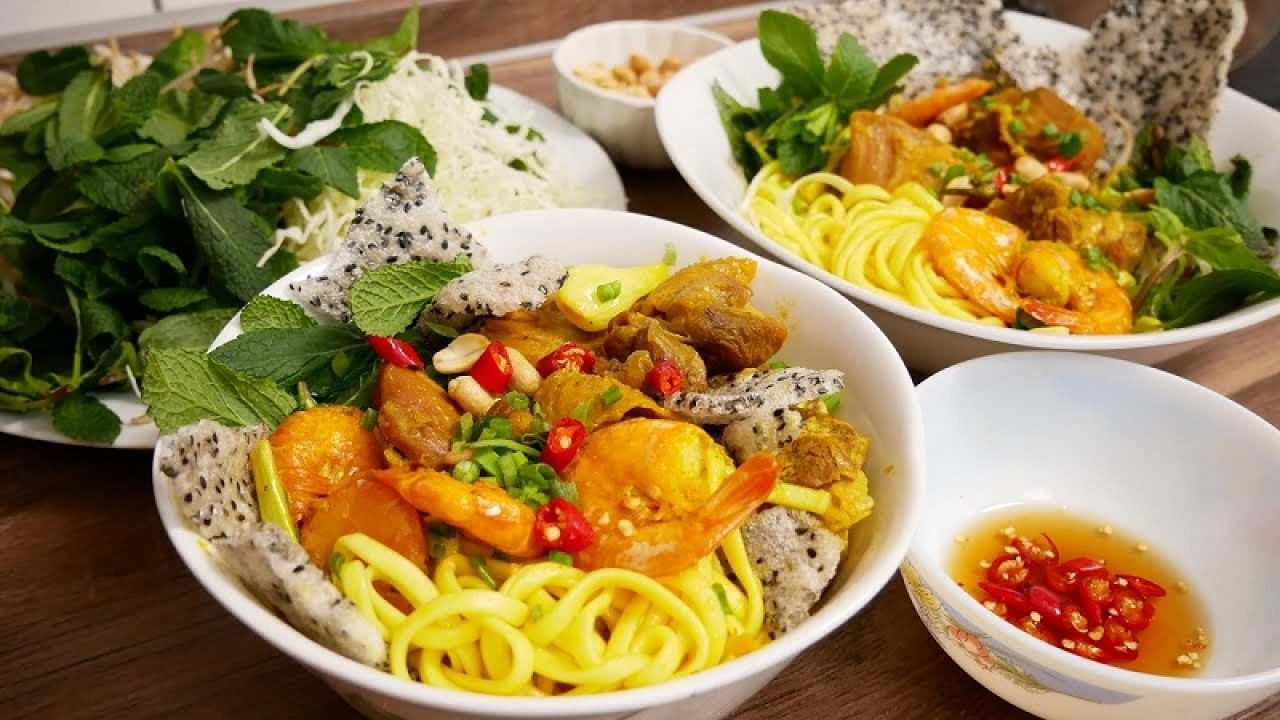 How to describe Mì Quảng. It has a rainbow of colors and a diverse assortment of ingredients, such as shrimp, pork, and quail eggs cooked in water. The meal is brought to its full potential by the incorporation of nine distinct varieties of vegetables, roasted peanuts, fresh lemon, and chili sauce. The magnificently flavorful soup is the result of the Central residents’ labors of love and commitment in the kitchen.

It makes perfect sense that Vietnamese people like chewing on Quang noodles first thing in the morning.

Vietnamese Breakfast in The South

Saigon (former name of Ho Chi Minh City) is home to a delicacy known as com tam, which literally translates to “broken rice”. A flawless serving of com tam must be dry and devoid of any sticky residue. Broken rice is often consumed with a wide range of components, including eggs, pork pies, spareribs, and pig pies, as well as a sauce that is comprised of fish sauce, sugar, and chile. 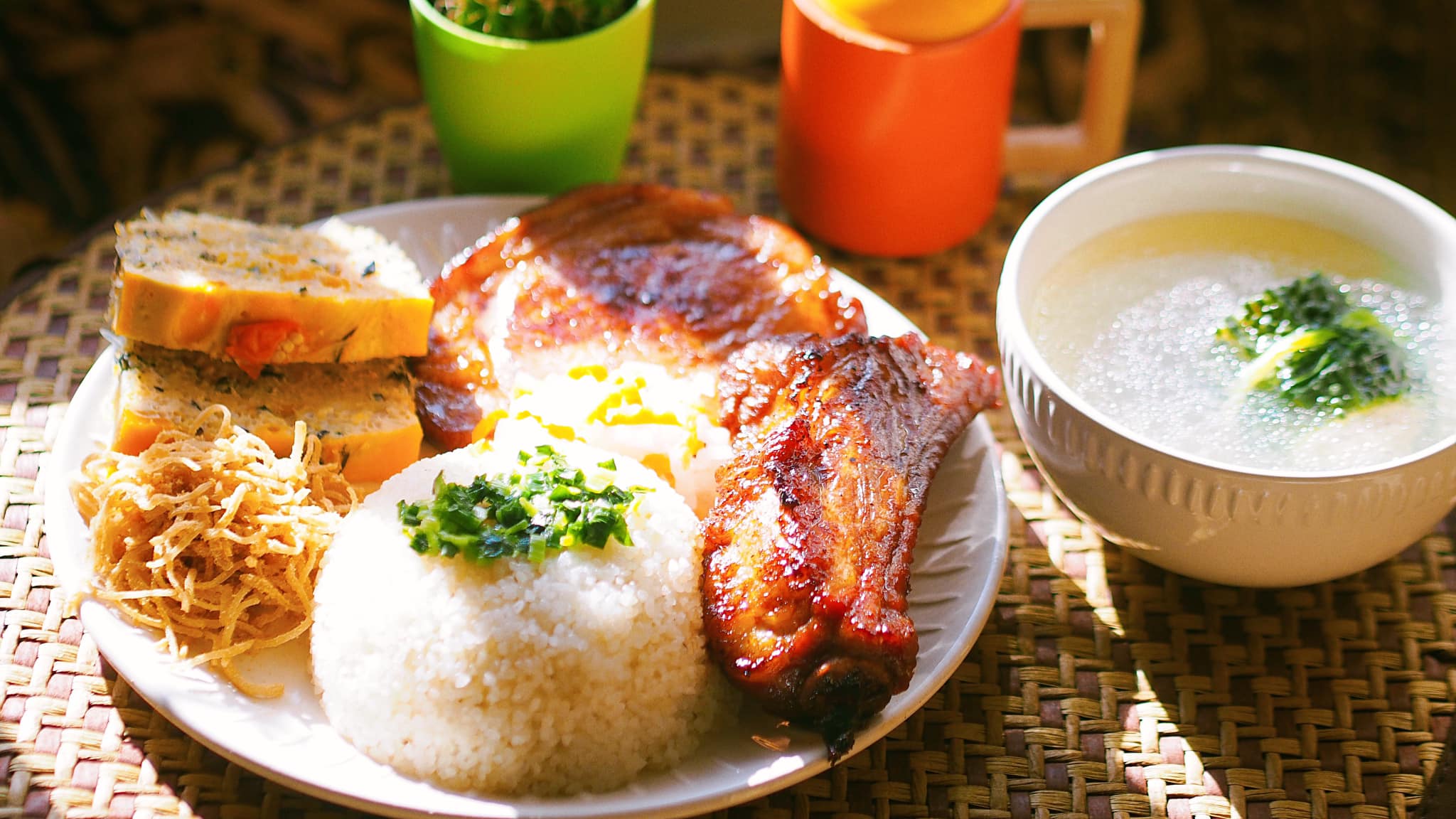 In addition, carrots and radishes that have been pickled will help to partly replace the flavorful components of com tam. Be sure to include a serving of this mouthwatering meal, which is traditionally served for breakfast in Vietnam, on your itinerary if you find yourself in Ho Chi Minh City.

On the streets of Saigon, the traditional dish bo ne has been transformed by the addition of a wide variety of new components, including beef slices, potatoes, pate, omelets, salad, and bread, among others.

Beef that has been marinated has a flavor that is robust and somewhat sweet, which is characteristic of Southern cuisine. The meal is made even more enticing by the inclusion of fatty pate, a golden egg, and crispy fries.

To prevent yourself from becoming bored as you eat, you could season the beef with soy sauce and chili sauce and snack on bread, tomatoes, and cucumbers.

Hu Tieu is a kind of Chinese noodle that has become popular in the South West. However, as time passed, the processing evolved to accommodate the local palate, resulting in the formation of three well-known noodle brands in the South: Hu Tieu My Tho, Hu Tieu Nam Vang, and Hu Tieu Sa Dec. 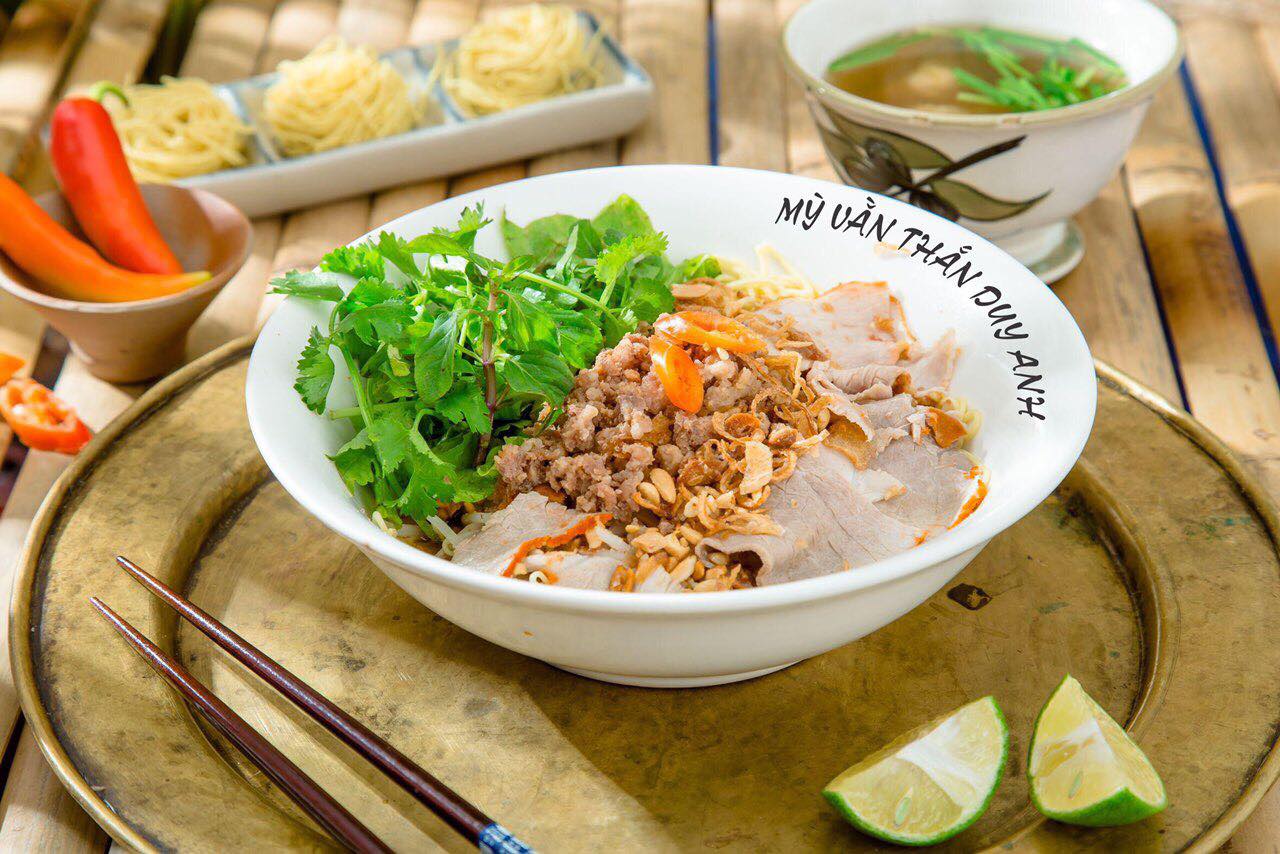 The Vietnamese pork and seafood noodle soup are similar to Pho, but it has different qualities, such as the addition of seafood, pig liver, quail eggs, and a broth made with ground pork. Today, Hu Tieu has become the most popular breakfast meal in Southern Vietnam, and it is recommended as a must-try Vietnamese breakfast dish

The top 10 Vietnamese breakfast dishes are very well-liked and can be found in each and every one of the country’s regions. As a result, you will be able to choose the proper food to provide your body with the critical nutrients it needs while also learning more about the gastronomic culture of the Vietnamese people. Hope this article will help you have a better choice when coming to Vietnam.

Visit our website at asianwaytravel.com if you are seeking Vietnam Tours for your upcoming vacation. We have over 100 Vietnam tour packages that may meet the demands of any client. 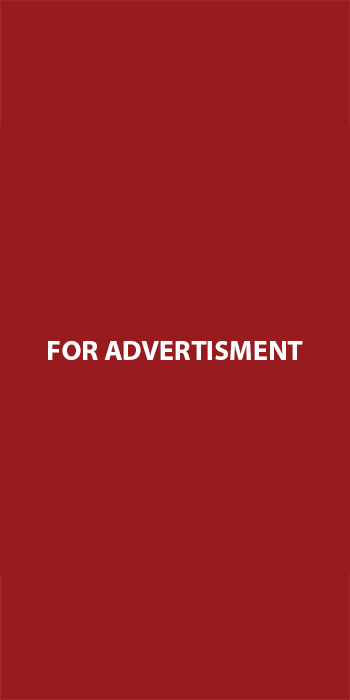